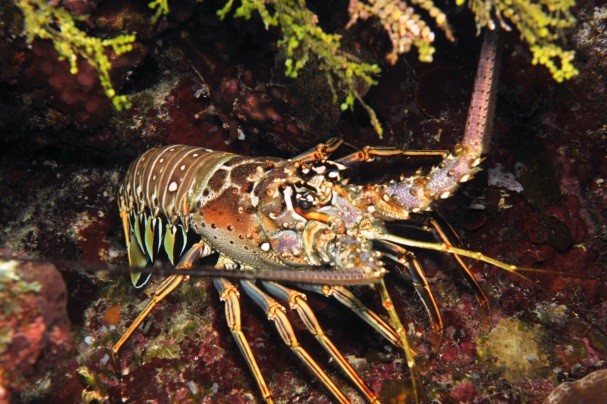 Below is information provided by John Dell’Angelo regarding the Lobster Experiment:

A component of last year’s marine field ecology course was the survey of a channel-bay located on the gulf side of Cudjoe Key. We found an area inhabited by numerous spiny lobsters, Panulirus argus, that were associated with the vase sponge, Ircinia campana, and the loggerhead sponge, Spheciospongia vesparium.  Also, we noticed that frequently more than one lobster shared the same substrate.

Last year during the introductory marine field ecology course it was common to find multiple lobsters sheltering in the same sponge. The lobsters stayed in holes carved in and/or under the sponges seemingly made by the lobsters. During this year’s advanced marine field ecology course we decided to conduct an experiment that would further our understanding of this association. Our prior observations on the lobster/sponges association led to two basic questions: a) Do lobsters consider a particular sponge “home”? We wanted to know if the lobsters returned to the same sponge each day after foraging at night. B) Are the groups of lobsters found in a particular sponge always composed by the same individuals? In the case of sponges inhabited by more than one lobster, we wanted to see if these lobsters preferred to stay in groups and if there were strong associations among particular individuals.

We assumed that such basic questions have been already clarified, and searching appropriate scientific literature would provide us with the answers. However, we decided not to consult existing literature but to conduct our own experiment that would test the hypotheses that we proposed during our group discussions.

1) Lobsters have a strong homing behavior, and same individuals will utilize a particular shelter, i.e., the same lobsters will be found occupying the same sponge during the observational period.

2) Lobsters maintain the same social group. If a group of lobsters are observed sharing a particular sponge one day then those same individuals lobsters will be found together on subsequent days.

We wanted to get first-hand experience of conducting such an experiment in the field. Dr. Vagelli suggested not look up for existing studies and utilize this opportunity to practice the design of a concrete experiment adequate for testing our hypothesis and answering our questions. This would add the benefit of encountering different unexpected challenges and rigors of designing a sound experiment and conducting it in the field. For instance, we decided that in order to conduct the experiment, we needed to tag the lobsters, and we had to come up with ideas for tagging the lobsters that would be efficient, humane and make them easy to locate again.

The study zone covered an area approximately 300 m long by 100 m wide. This area spanned from the shore that is lined with mangroves to a depth of approximately 2 m. The bottom is covered with sandy patches, and areas with seagrass and thick coralline algae.

We started out by surveying the area, counting all sponges and lobsters in our study area. We learned rather quickly that proposing something like tagging lobsters and actually carrying it out are very different things.  Our original plan was to make a slip knot, slide it down the lobsters’ antenna, and then tie it (easier said than done). We wound up diving below the surface and capturing the lobsters with nets, tagging them above water, and releasing them back to their sponge. This was also easier said than done but we got better as we went on.  We identified 10 sponges that had 2 or more lobsters with them, tagged those lobsters and identified those sponges with buoys.  For the next two days we came back to the site and documented the lobsters’ movement.

This project was not as easy as it may sound, tagging lobsters over a large area presented many challenges. Working with live specimens in their natural habitat is harder than in a lab because our specimens could swim away. These challenges also included varying tides, and currents causing turbidity which made it hard to see and swim at times. It took several hours of swimming to locate the lobsters each day. However, we did manage to generate some good data. The sample was small and therefore the results were not particularly decisive, but the point was to carry out the experiment and generate data. We never expected to “discover” anything new about this observed relationship, however we did generate data. We tagged ~18 lobsters and we were able to recover ~13-14 over the study period. It could also be used as preliminary data to conduct more studies on lobster behavior, and aquaculture.

We learned that designing and conducting an experiment in the field is much harder than you may think. We have read many papers that have these types of surveys described in the materials and methods. We will now be able to read materials and methods with greater perspective of what is being described. We gathered data during this study but more importantly we gained experience in conducting a field study. We all have a greater level of confidence in our abilities to conduct similar field studies. This experience is invaluable to us as biologist no matter what direction we go in from here.